The Novel About A Strong Woman That Needs A Strong Man

The Novel Broken Queen is inspiring women everywhere. The book has been read by more than 25 million readers around the world, on the addictive romance reading app Galatea. The app has received recognition from BBC, Forbes and The Guardian for being the go-to place for the hottest new novels. 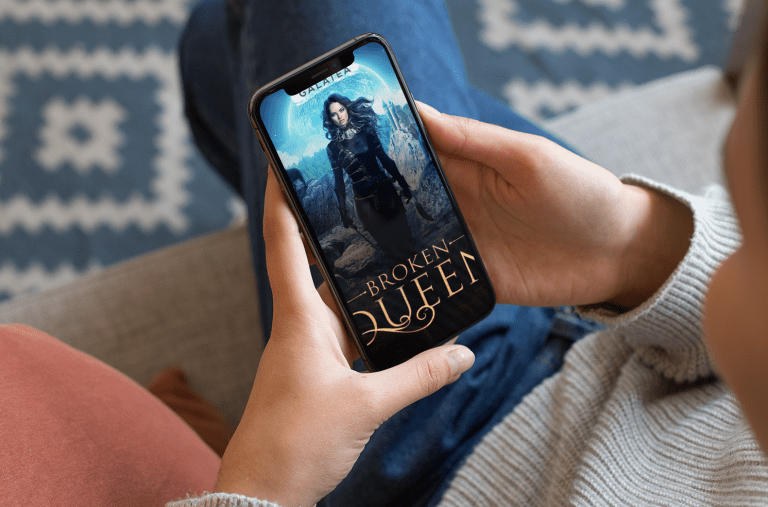 Ariel is a twenty-year-old werewolf, with dreams of becoming a pack warrior. At least that was until she was kidnapped and subject to torture, which almost ended her life. Missing for almost two years, Ariel finally gains freedom by the help of her very own goddess. Once free, Ariel’s ready to pick up life where she left off and run back into the arms of her destined true love.

Fate has greater plans for this young warrior and rejoining regular life after two years passing her by may be even harder than she imagined.

As I watch the wild-looking she-wolf in front of me, lying unconscious on the ground, I can’t help but wonder if she escaped the fire…or if she started it.

There’s a feral quality about her, but she’s definitely not a rogue. So what the hell is she doing all the way out here, alone?

I bend down and survey her body, looking for any sign of a pack.

As I lightly touch her arm, a hand suddenly wraps around my throat. The girl is awake.

Her bold, yellow eyes stare at me with fear, and they’re quite beautiful, despite the fact that she’s trying to choke me out.

She releases her grip and crawls away, stopping at the base of a tree and leaning against it for balance. She’s surprisingly strong.

There’s a bullet wound in her leg, and although she’s covered in blood, the wound oddly isn’t bleeding.

“Who…who are you?” she asks, holding out her claws, ready to strike if I get too close.

“My name is Alex,” I say, holding up my hands. “What happened here? Who shot you?”

I suddenly catch some more scents, but these aren’t wolves…they’re humans. And they’re dead.

“Did you start that fire? And murder those humans?” I ask in an accusatory tone. “It’s against our laws to kill humans. Are you a rogue?”

“I…yes, I started the fire. But I’m not a rogue. And they weren’t just humans…they were hunters,” she responds, with a pained look in her yellow eyes.

She lifts her arm to show me a small crescent moon tattoo—the mark of a pack warrior.

“You’re from the Crescent Moon Pack?” I ask, somewhat skeptical. “How did you end up out here? This is the border of the Royal Pack.”

The girl sighs, exasperated. “Are you thick? I told you, hunters.”

“I think I’d know if hunters were operating outside my own pack,” I say, annoyed.

“Your pack? Who made you the king?” she asks, rolling her eyes. “You’re clearly just a common pack warrior coming out here on your own.

“And,” she continues, “if you couldn’t scent the hunters that were right underneath your nose, then maybe you need to go back to training.”

Damn, this girl is arrogant. I can’t believe she’s speaking to me like this.

“Pretty convenient that you destroyed any evidence that would prove there were hunters here,” I growl.

I’m surprised to see tears welling up in her eyes, breaking through her tough exterior.

“I…I just couldn’t let them live. What happened to me…I can’t let that happen to anyone else.”

Even though all my training tells me that this girl is dangerous, my wolf is telling me that she’s being truthful.

Something terrible happened to this girl…something traumatic. And it’s eating away at her.

I know the feeling.

“What’s your name?” I ask, suddenly feeling guilty. It’s the first question that I should have asked her.

Ariel Thomas of the Crescent Moon Pack…what story lies behind those sunflower eyes?

I reach out and offer my hand. “You need medical attention. Will you allow me to take you to the pack?”

She slowly nods as she takes my hand, but when she tries to stand, she screams in agony, and her legs buckle beneath her. I catch her just before she hits the ground.

Bleeding or not, that bullet wound must be bad.

“Why isn’t it healing?” she asks, frustrated.

Healing? Wolves might heal faster than humans, but this is a fresh wound. Why would she expect it to heal?

The rustling of the trees around us announces a squadron of warriors, led by Dominic, as they burst into the clearing.

“Alex, stay back! She could be dangerous,” Dom growls, as he steps in front of me. “I thought you weren’t going to do anything stupid.”

“Relax, the threat isn’t her. The threat was hunters, and they’ve already been neutralized,” I respond.

It suddenly hits me how strange it is that this one wounded girl could escape from and kill an entire gang of hunters by herself. Something isn’t adding up…

Dom signals for a couple of the warriors to investigate the wreckage, the fire now reduced to a smolder.

“And who is this?” Dom asks, pointing aggressively to the girl in my arms.

She’s sweating badly. It’s clear the injuries are taking their toll on her.

“Wait, you’re suggesting bringing her to the pack? Alex, she could be a rogue, or—”

“She’s no rogue,” says an older warrior as he steps forward. I recognize him as Steven, one of our most seasoned and most respected warriors.

“How do you know?” asks Dom, incredulous.

Ariel’s eyes flutter shut as she passes out in my arms. I grip her tightly to keep her from falling.

“Because…” Steve’s gaze grows serious as he stares at Ariel. “I knew her father.”

The soft beeping of the heart rate monitor wakes me from my sleep as my eyes adjust to the harsh fluorescent light above me.

My rags have been replaced with a hospital gown, and someone has left a bouquet of flowers at my bedside.

A sudden overwhelming feeling washes over me, and I feel tears spilling down my face.

This is the first time in two years that I’ve woken up without chains or shackles binding my hands and feet. I’m finally free.

I pull back the blanket covering me to examine my leg. To my surprise, the bullet wound has completely closed up. It’s as if I was never shot.

I quickly throw the blanket back over my leg, not wanting to draw attention to my healing ability.

An older man, around my dad’s age, approaches my bed. I recognize him as one of the warriors from the woods.

“Are you here to guard me?” I ask, somewhat sourly.

I guess it shouldn’t surprise me that these people don’t trust me.

“On the contrary,” he says cheerily. “I just came to visit. I haven’t seen you in years, but you still have your father’s eyes.

“What was it he always called you? His little warrior?”

“How…how do you…” I respond, choking up.

“I knew your father a long time ago. You were probably only three or four years old when I last saw you.”

“Is he…is he coming?” I ask, suddenly scared that something might have happened to him in the two years that I’ve been gone.

“He’s on his way as we speak,” the man responds, smiling. “He was overjoyed when he found out you were alive and safe.

“He couldn’t say any words other than ‘thank the Goddess’ for about thirty minutes.”

Thank the Goddess is right. Selene is the only reason I’m still here.

“I’m sorry, I don’t even know your name,” I say, extending my hand to my father’s friend. “It’s been a while since I…since I really talked to anyone.”

“The name is Steven, but you can call me Steve.”

His expression turns sad as he clasps my hand. “I can’t imagine what you went through, Ariel.”

“If you ever need to talk, I’m here for you. And my wife, Louisa, too. She sent the flowers, hoping they’d brighten up this stale room a bit.”

“You’re both very kind,” I say, my eyes growing misty.

“It takes someone with real strength to endure what you did,” Steve says warmly. “A real warrior. We could use someone like you on the squad.”

A soft knocking draws both of our attention to the door, where Alex is standing, holding a bouquet of sunflowers.

“Steve, I’d like to speak with Ariel, if you don’t mind.”

As he leaves, Alex takes his place at my bedside and places the flowers in an empty vase.

“Those are my favorite,” I say, impressed. “How did you know?”

“Oh, uh, I didn’t actually,” he stammers. “They reminded me of your eyes.”

Maybe it’s just the unflattering fluorescent lighting, but it looks like Alex’s face is red. Is he blushing?

“I…I’m sorry I was a little…suspicious of you, in the woods,” he says, scratching the back of his head nervously.

“I should’ve known you weren’t a rogue.”

“I’m sorry too, for that dig about the hunters,” I say.

I feel like I was a bit harsh, myself. “They were hiding out underground. It would’ve been impossible to know what was going on.”

“Ariel, I can’t imagine…” Alex says, his posture going rigid. “The things they did to you…we found some of their torture devices in the wreckage.”

His face is red again, but this time it’s from rage. “I’m glad you put an end to them…but, how? How did you manage to escape?”

Alex seems like someone I can trust, but I’ve only just met him. I don’t feel comfortable telling him all my secrets. And would he even believe me if I did?

I still don’t know how this whole healing thing works. So far, it’s been pretty unpredictable.

“Look, Alex, I appreciate the flowers, but I really just don’t want to relive it right now,” I say quickly. “Can we talk about something else?”

“Oh, of course,” he says, getting flustered. “What do you want to talk about?”

“Well, we’re both pack warriors, aren’t we? At least…I was training to be a pack warrior. I didn’t exactly make it to my final test before…”

My voice trails off. Two years ago, my life was completely taken from me. Now I have no idea where I stand.

No idea what I’ve missed.

Just because I disappeared doesn’t mean the world stopped and waited for me.

“You’ve lost a lot,” Alex says as if he can read my mind.

His eyes meet mine. “When you lose something…or someone…you just feel out of place. It takes a long time to find your purpose again.”

I suddenly realize that Alex is holding my hand, but I don’t pull away.

I feel a connection with him. The way that he understands loss, he must’ve lost something important to him, too.

“Excuse me,” a doctor says abruptly as he enters the room with a clipboard. “Hope I’m not interrupting.”

Alex quickly pulls his hand away. “Yes, what is it?” he asks, clearing his throat awkwardly.

“I’d like to run a couple more tests on Ms. Thomas if that’s alright,” the doctor says.

Alex nods and gets up to leave. “We’ll talk more later, Ariel.”

As he walks to the door, the doctor bows to Alex. What the hell?

“Please keep me updated on her status,” Alex says, as the doctor lifts his head back up.

Did he just say…

Alex isn’t a pack warrior. He’s the Alpha of the Royal Pack!

Which also makes him…

Things are about to get a whole lot messier for Ariel. Join her and find Galatea in your app store now.